UASF / User Activated Soft Fork: What is It? 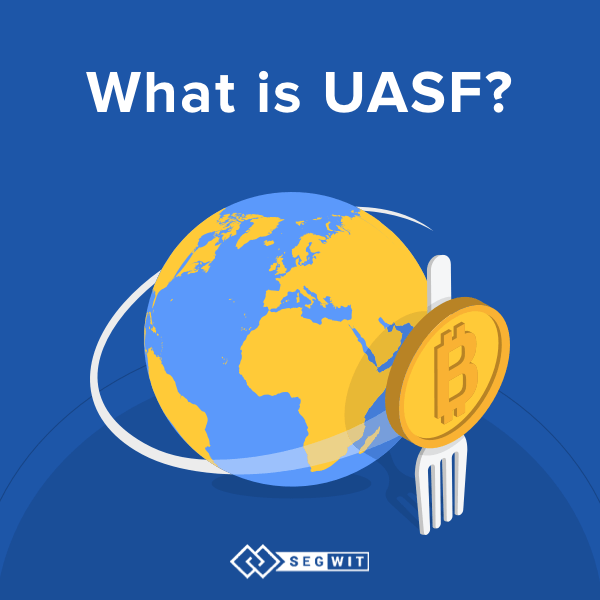 The Bitcoin UASF was an important chapter of the history of Bitcoin and the crypto market in general. It was an attempt to activate the SegWit update, which was meant to improve Bitcoin’s blockchain by making it more scalable.

What Is a UASF?

UASF is the abbreviation for User Activated Soft Fork. It represents a mechanism in which the activation time of a blockchain soft fork is enforced by the full nodes, which are commonly referred to as economic majority.

Traditionally, soft forks have been triggered by miners, who exert their control over the network. However, a UASF mechanism takes this control from miners and puts it into the hands of the nodes.

Soft forks are meant to improve the operations of their underlying blockchain by introducing new features. Unlike hard forks, soft forks do not split the blockchain network as they simply implement some slight changes for the sake of improvement. More importantly, soft forks don’t violate any current rules of the existing protocol, whereas hard forks do.

However, there might be different opinions on how and when these changes should be adopted. Usually, miners could green-light a soft fork and set its activation time by leveraging their hash power.

But sometimes the entire blockchain community might not agree with the majority of miners, and this is when a UASF makes sense. Under the concept of the UASF mechanism, it’s the blockchain economy – including individual users, wallet providers, exchanges, and other entities – that triggers the soft fork activation.

This was a potential for taproot activation in 2021.

All in all, a UASF involves a lot of coordination and the support of an entire blockchain community.

The concept of UASF was imperative in the activation of the Bitcoin’s Segregated Witness (SegWit) soft fork that was implemented to better scale Bitcoin’s blockchain.

While UASF is a generic term, BIP 148 is the name of a specific UASF proposal that sought the activation of the SegWit update in Bitcoin. BIP stands for Bitcoin Improvement Proposal. As for SegWit, it is an important Bitcoin update that needs a separate article – you can read about it here.

As per BIP 148 proposal, which was released in March 2017, the date of the SegWit activation was set for August 1, 2017. On that day, Bitcoin miners should have signaled their readiness for the update implementation by generating blocks with the version bit 1, which effectively would have caused all SegWit ready nodes (with the condition that they account for more than 80% of the network) to trigger the SegWit activation.

BIP 148 came out as a protest against the power of miners. The proposal was among the first initiatives that laid out the concept of UASF at such a scale, prompting much controversy. BIP 148 supporters believed miners were blocking beneficial code updates that would improve blockchain operations.

At the time, BIP 148 was supported by a decent number of crypto exchanges, wallet providers, developers, and other key players of the Bitcoin community, including Bitfury, Blockchain Academy, CoinGate, Coinomi, and Trezor, among others.

In February 2017, Litecoin developer under pseudonym “Shaolinfry” posted a new Bitcoin proposal on bitcointalk.org and the Bitcoin development mailing list, calling for a UASF. That was about three months after SegWit was officially released.

Shaolinfry said in his proposal that the miners’ hash power activation mechanism used in soft forks was never meant to be the equivalent of a vote. He stated:

The signaling methodology is widely misinterpreted to mean the hash power is voting on a proposal and it seems difficult to correct this misunderstanding in the wider community.

As an alternative, Shaolinfry suggested that a UASF would force miners to follow the economic majority. His proposal prompted many reactions on social media and Bitcoin forums, with many Bitcoiners supporting the idea.

Several weeks later, Shaolinfry and a dozen other reputable members of the Bitcoin community launched a UASF discussion on the Bitcoin Core Community Slack, during which he authored the BIP 148. Initially, the flag date for the SegWit activation was set for October 1 but was later moved to August 1.

Did UASF Work in Activating Segwit?

Yes and no. The activation of SegWit is a long story. You can say that the UASF as a concept was substantial in speeding up in the adoption of the blockchain update, but it was not specifically the BIP 148 that triggered the activation.

For the beginning, Shaolinfry wanted to convince exchanges and other Bitcoin-oriented entities to join the UASF initiative. If big players had supported the BIP 148 proposal, they might have formed the economic majority that could trigger the activation.

However, that proposal didn’t receive the needed support. As I mentioned above, some companies were ready to endorse the proposal indeed, but there were major exchanges and other businesses that were neutral or even spoke against the initiative, citing divergences in opinions and concerns of a potential split in the network.

In parallel, the big players were mulling over an alternative option as the debate over the block size intensified. Let’s call it “the second group.” It was scared by software client Bitcoin Unlimited, which sought to carry out a hard fork that would boost the block size limit. The threat of a hard fork forced the second group, created at the initiative of Digital Currency Group founder and CEO Barry Silbert, to unite.

The members took part in a meeting before the Consensus 2017 event in New York, USA. The group comprised 58 companies and investors from 22 countries, including Coinbase, Bitmain, Bitfury, Blockchain, Circle (Canada), BTC.com (Europe), Bitcoin.com, F2Pool, BitPay, Luno (UK), Genesis Mining, and many more. They represented the biggest part of the Bitcoin industry, including miners (whose hash power exceeded 85%).

The outcome of the infamous meeting, which didn’t include Bitcoin Core members, is referred to as the “New York Agreement.” The members agreed on a compromise between those who planned to boost Bitcoin’s block size via a hard fork and those who favored SegWit. They aimed for a combination of a soft fork activation of SegWit once 80% of the hash power had expressed their readiness for the update as well as increase the block size limit.

The main issue with these backdoor agreements is that it would have set the precedent for miners, Bitcoin banks, exchanges and other powerful players to add other new rules to the network. For example, they could add taxes, inflation, or other changes the Bitcoin users don’t want.

As a result, there were two approaches to activate the SegWit update – the BIP 148 Group, which ignored miners, and the second group, which counted on miners.

There was a real threat that the network would split, causing chaos.

Fortunately, Bitcoin mining software developer James Hilliard came to the rescue. He initiated BIP91, which attempted to conciliate the two groups and focus on the key target that they both had in common: the activation of SegWit.

Basically, BIP91 was meant to activate the update, assuming enough miners ran it quickly, before the UASF date.

And this is exactly what happened.

As of April 2020, after more than two years following the activation, SegWit is currently adopted in only half of the Bitcoin transactions, though the trend is ascending.