Are you looking for the best way to store your Litecoin?

This post will cover everything you need to know about Litecoin wallets.

That includes the best Litecoin wallet apps and hardware wallets.

We give you tons of options so you can choose the best wallet based on your needs.

Read on to find the perfect Litecoin wallet for you! 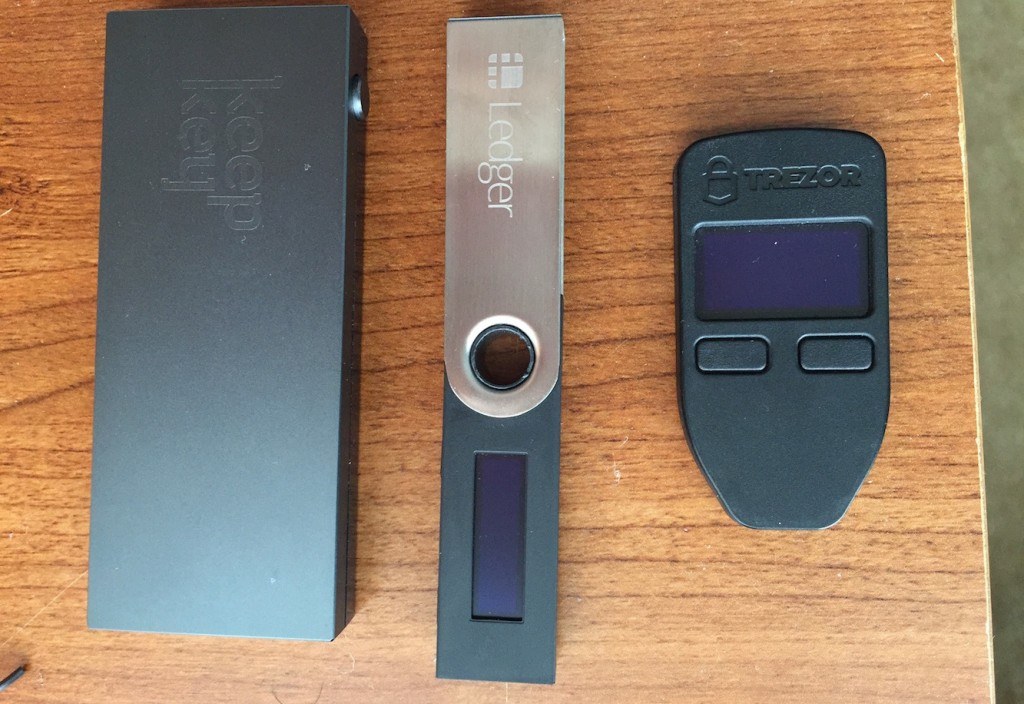 Hardware wallets are the best choice if you need secure storage for your litecoins.

Unless you’re an advanced user, a hardware wallet is likely the easiest and safest way for you to store your litecoins.

If you have enough cryptocurrency to the point where you’d be very upset if you lost it, you should buy a hardware wallet. 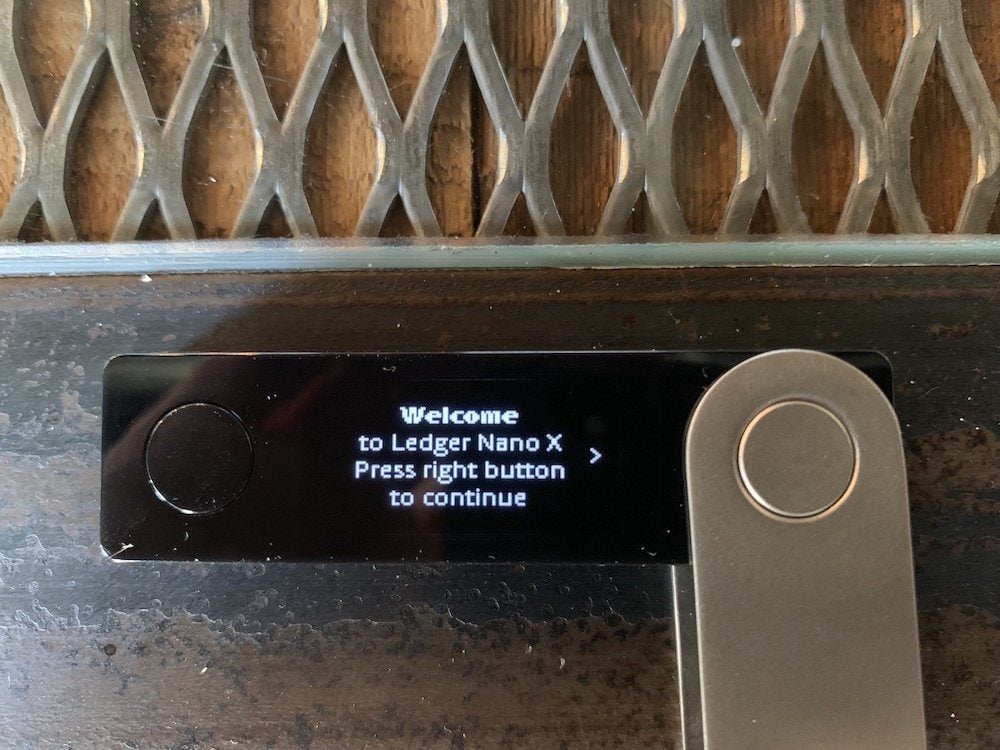 Out of all hardware wallets, it’s the easiest to use and setup. It’s a good choice for someone who needs a mix of security and usability.

It connects via bluetooth to iOS devices, or via USB to your computer. 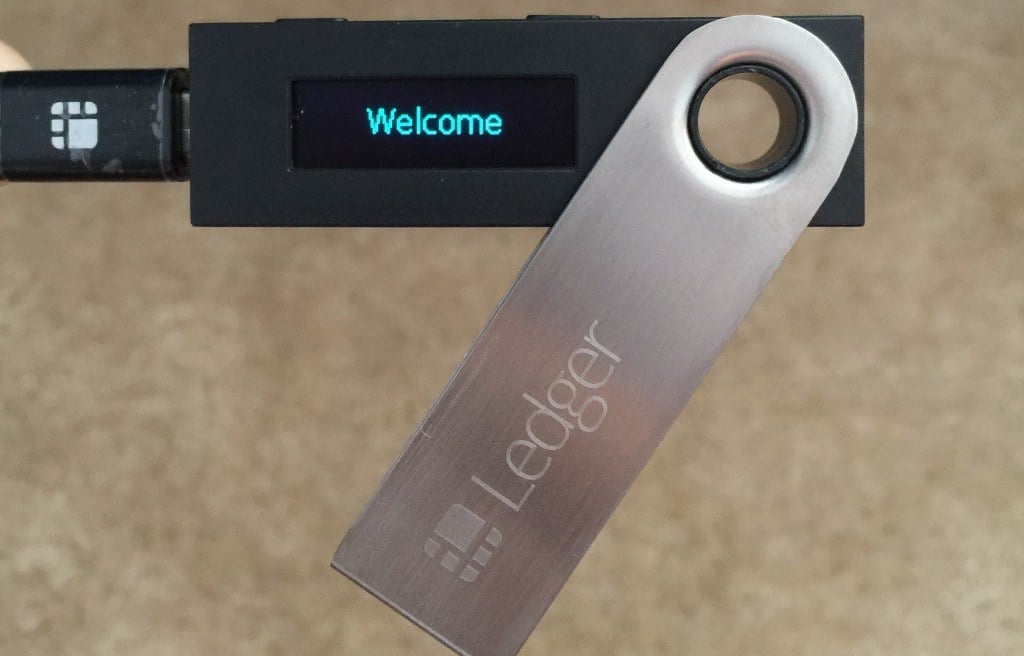 The Ledger Nano S is probably the most popular crypto hardware wallet at the time of writing. It costs about $59 and is sold by Ledger, a Bitcoin security company based in France.

The Ledger Nano S supports Litecoin, Bitcoin, Ethereum, Ripple, Monero and many other coins. The device creates your private keys in its secure chip and stores your keys offline away from the internet.

The Nano S has a screen so it helps you verify and confirm all outgoing transactions, which provides additional security.

TREZOR T is very similar to the Nano X, but is sold by Satoshi Labs. TREZOR was actually the first hardware wallet to have a screen, which provides extra security.

TREZOR T will cost around $220 and ships from Europe.

If you plan on investing in many coins, the Ledger Nano X is probably a better option. But if you plan to stick to the main coins, there’s not a huge different between the TREZOR and Ledger.

For desktop, there are three solid choices for Litecoin wallets. 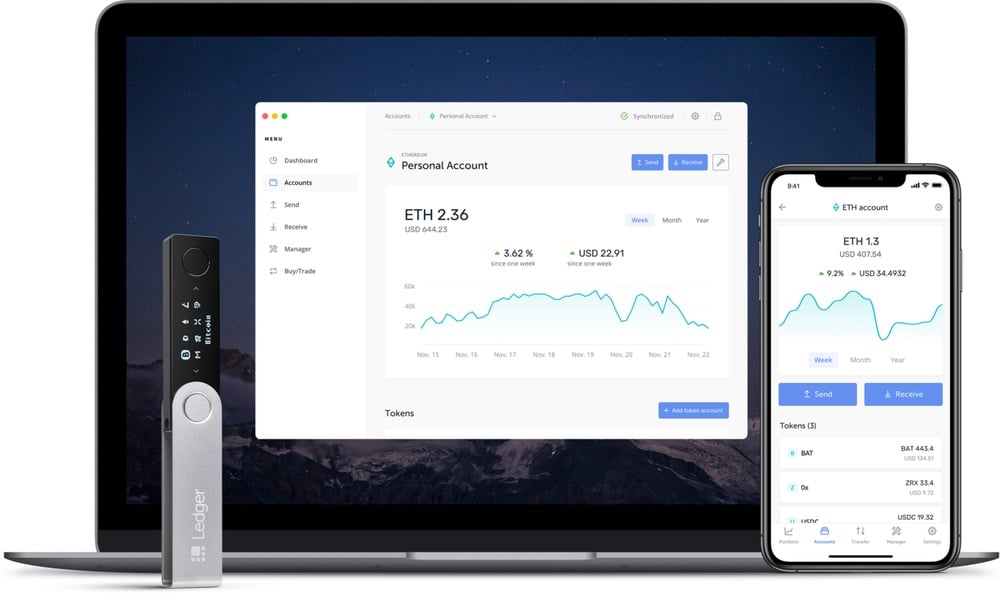 They provide an easy to use interface that works perfectly with your Ledger hardware right out of the box.

It is also totally free and is constantly updated to add new features, fix bugs, and improve user experience.

If you are holding LTC and want one of the better desktop wallets without sacrificing security, Ledger Live is a great choice!

Electrum LTC is a fork of the Bitcoin wallet Electrum. It is available for Mac, Windows, and Linux.

Electrum LTC is a blazing fast wallet that works instantly after installation. Since it’s used on your computer, consider it a hot wallet and don’t store large amounts of bitcoins with it.

If you want to use Electrum LTC for large amounts, buy a hardware wallet as mention above like the Ledger Nano S or TREZOR and use that in pair with Electrum LTC.

The source code is available on Github.

You can check out our Electrum LTC setup guide here.

Litecoin Core is the main full node implementation of Litecoin. It is the most private wallet and fully verifies all Litecoin transaction data, meaning you don’t have to trust anyone.

It is a good choice if you run a business. But otherwise it is a slow wallet that most users won’t want to deal with.

Litewallet is made by the Litecoin Association and is a fork of the popular Bitcoin wallet breadwallet. It is currently available for iOS. It’s simple to use and has a very clean interface, making it a great choice for beginners.

The wallet can be used to store small amounts of LTC on your phone. But, since it is a hot wallet is should not be used for large amounts of litecoins.

Ledger Live isn’t just for desktop. You can also get it on your android device!

This is a great option for users of the Ledger Nano X hardware wallet because you can connect to it using Bluetooth and pairing it with the Android Ledger Live app.

Jaxx is a multi-currency crypto wallet for iPhone and iPad. It supports Litecoin and is fully open source. It should not be used for large amounts of litecoin, but is a great option for day-to-day use or accepting payments on the go. 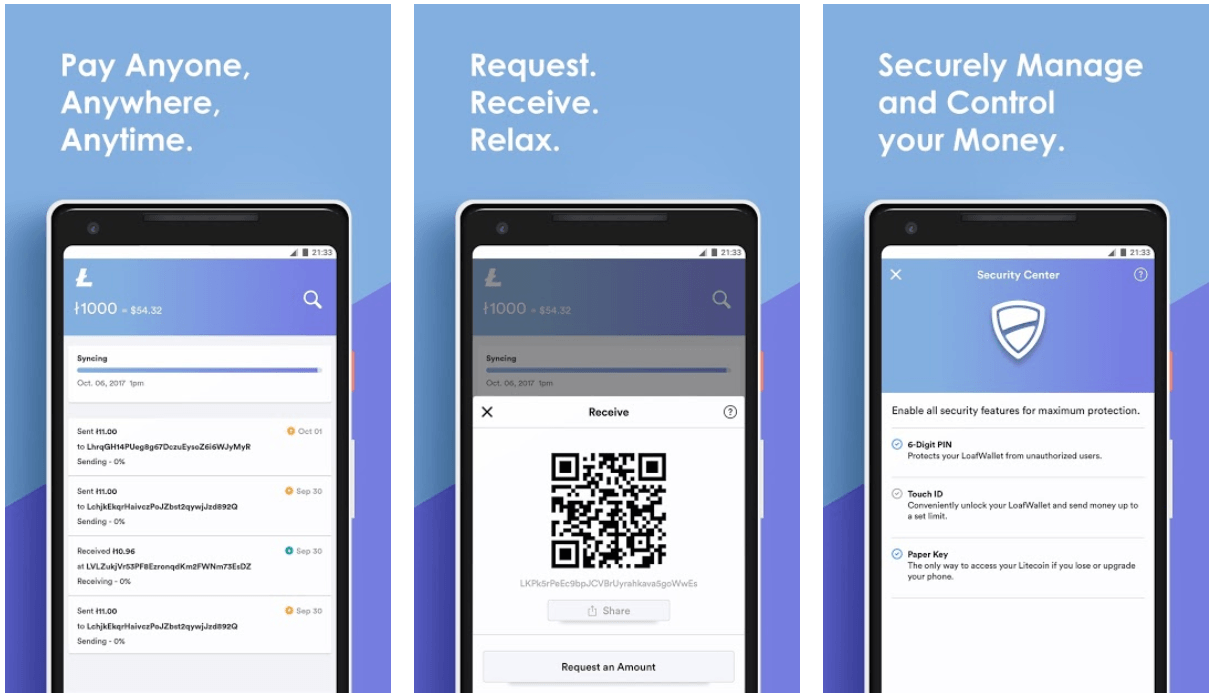 Litewallet also has an Android version and is probably the best option for Android users.

The iOS version of LoafWallet was originally created by Charlie Lee, the creator of Litecoin. The Litecoin Foundation later forked the code and released an Android version of the wallet. You can check our LiteWallet setup guide and review here.

Jaxx, as mentioned above, is also available for Android.

The Litecoin Wallet is another good option for Android and has been around for a while.

We can no longer recommend that anyone use a paper wallet as it is very easy to lose the paper in a natural disaster or to make a mistake during the creation of the paper wallet.

In many cases, making a paper wallet exposes your private key to online thieves because your connection is not secure or you use a fake paper wallet site that is designed to steal your litecoin.

Such as the scam that is run at bitcoin paper wallet (dot) com:

That being said, if you are determined to use a paper wallet, then we suggest using liteaddress.org. 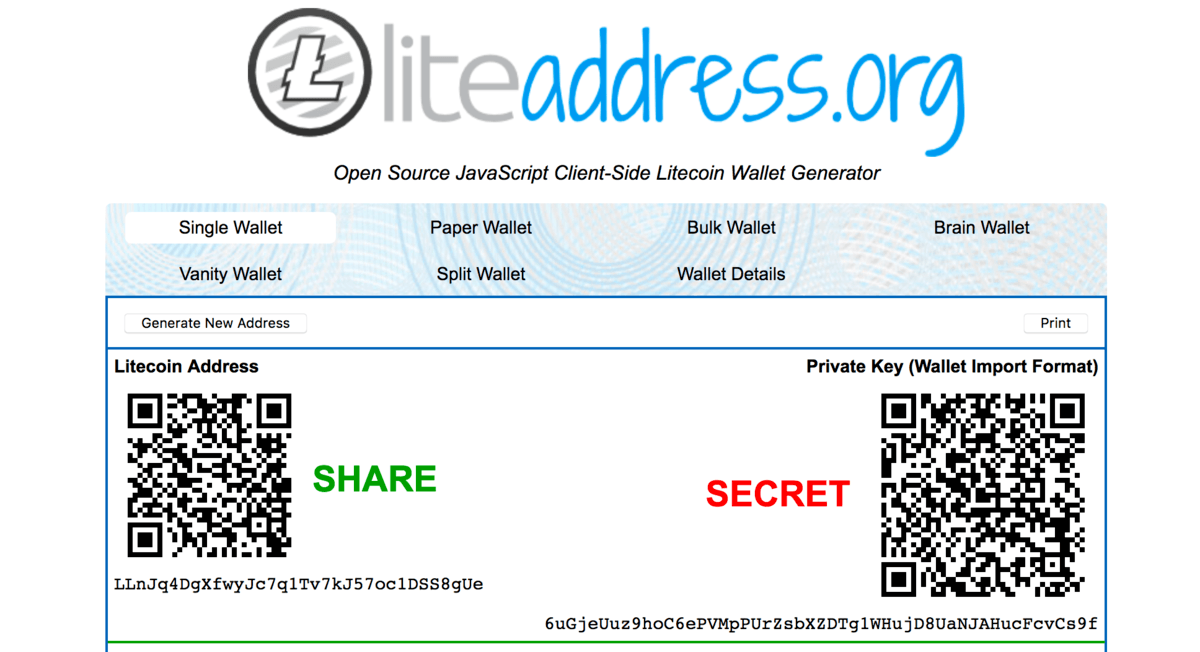 You’d go to liteaddress.org on an offline, secure computer and then print out the private key to create a paper wallet.

What to be mindful of:

For this reason you’re better off using a hardware wallet.

If you have enough money to spend on Litecoin, then spending another $59 for a Ledger Nano S is surely worth the price.

LiteWallet was made by Litecoin creator Charlie Lee and is maintained by the Litecoin Foundation.

Before we go over LiteWallet, remember:

Mobile wallets are NOT a good place to secure or store large amounts of litecoin.

It is only good for small, daily amounts.

Download the wallet from either the iOS app store or the Google Play Store.

We wrote this guide using an iPhone, but the setup process is the same on Android devices.

Once installed, open the app and click “New Wallet”. 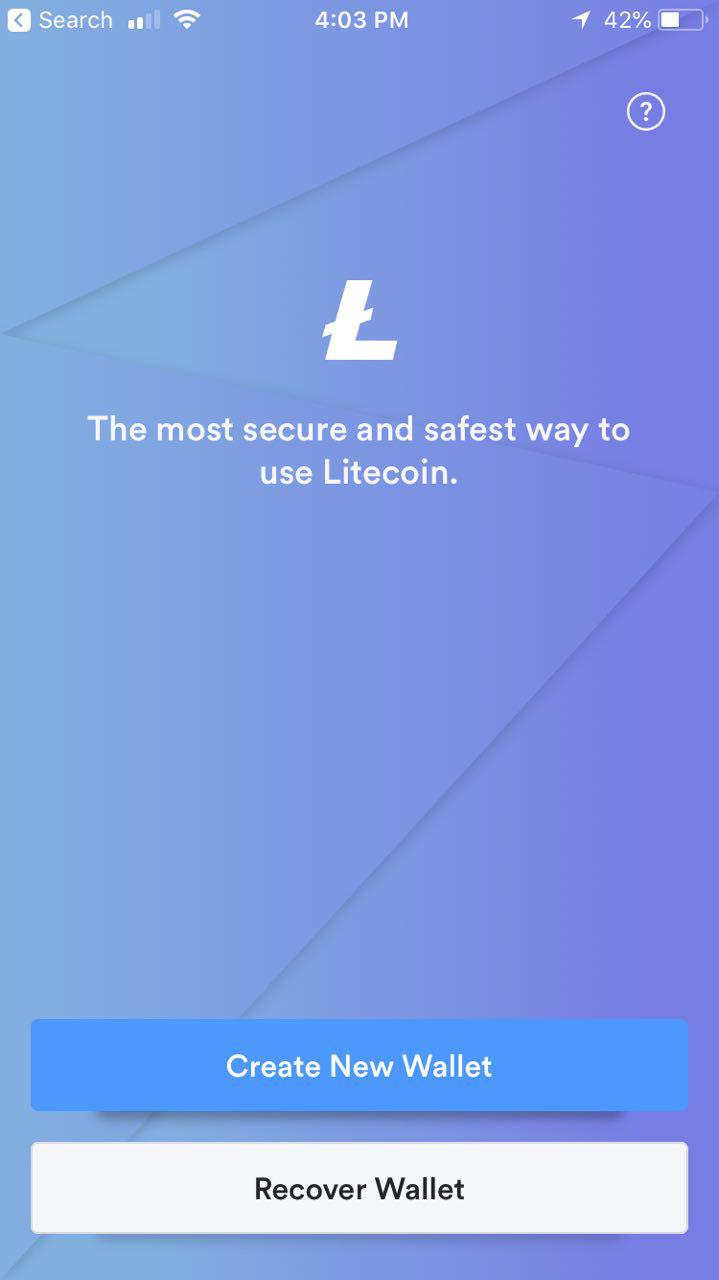 Now, set a pin code and on the next step you’ll be asked to re-enter. 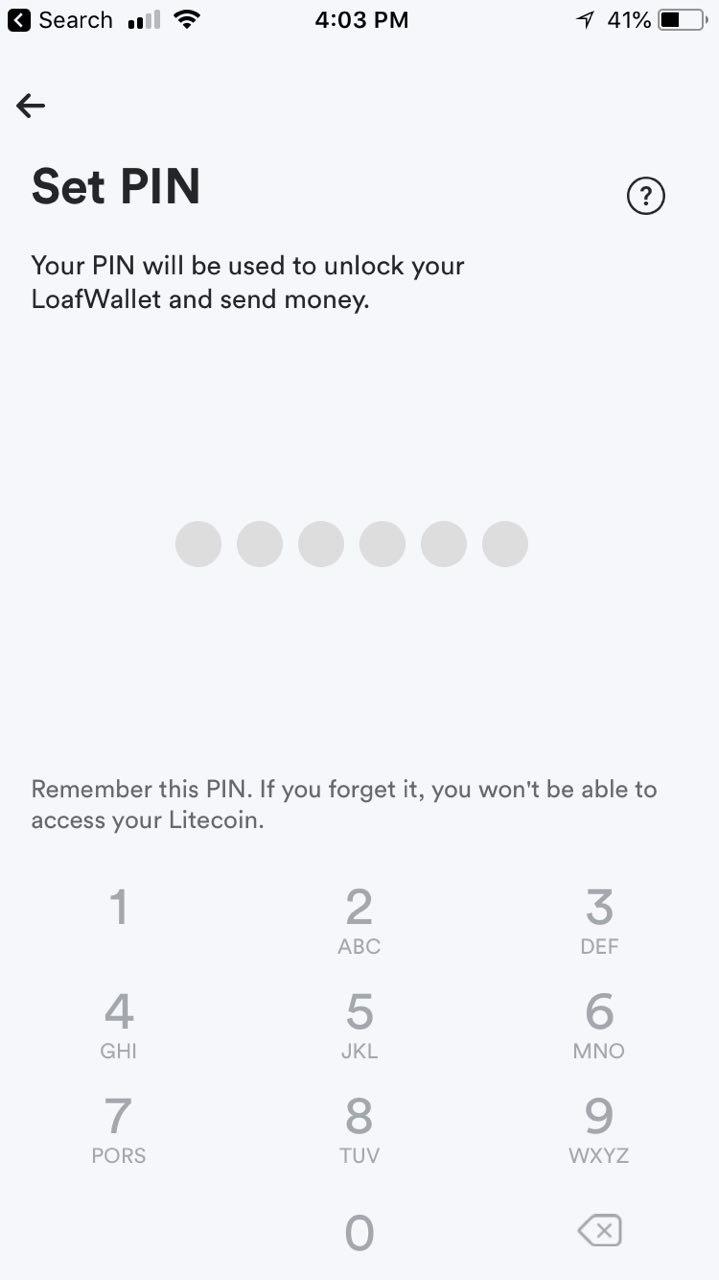 Next you’ll start the process of generating and backing up your recovery seed. 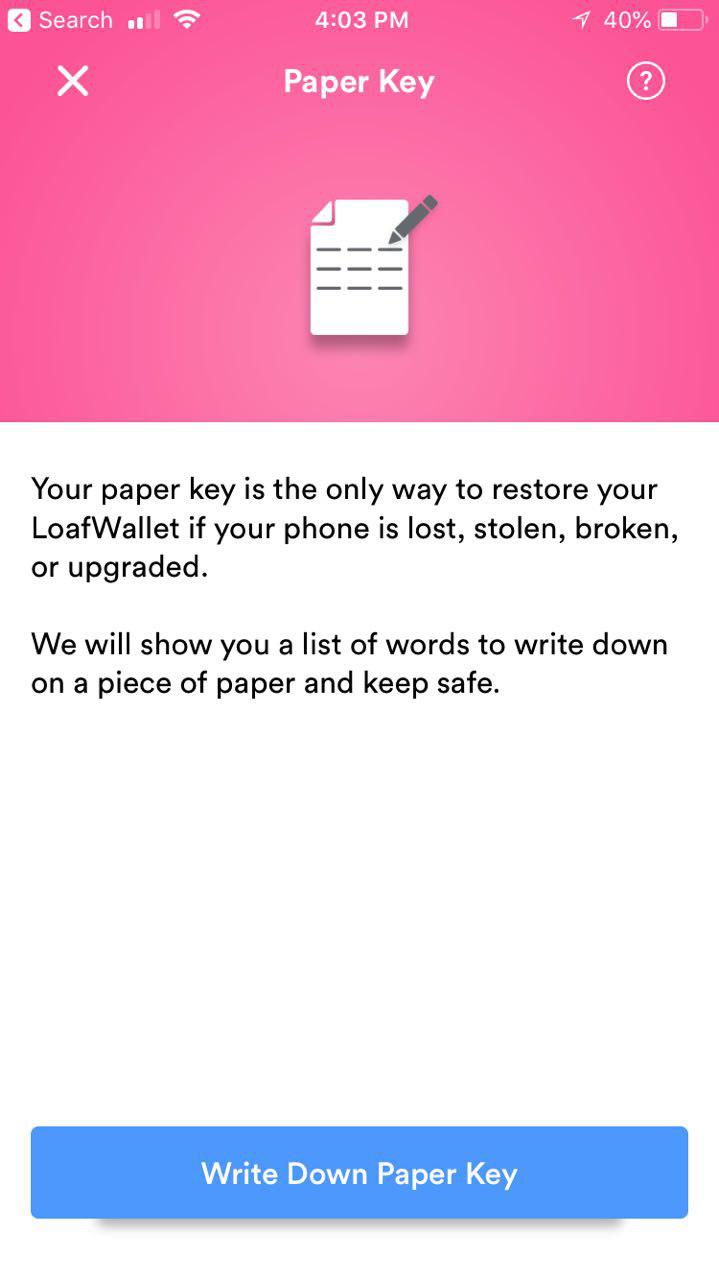 The app will give you the 12-word backup seed one by one. Write down the 12 words on a piece of paper and store it in a safe place. This is a backup of your wallet. Even if something happens to your phone, you can always re-access your money using these 12 words. 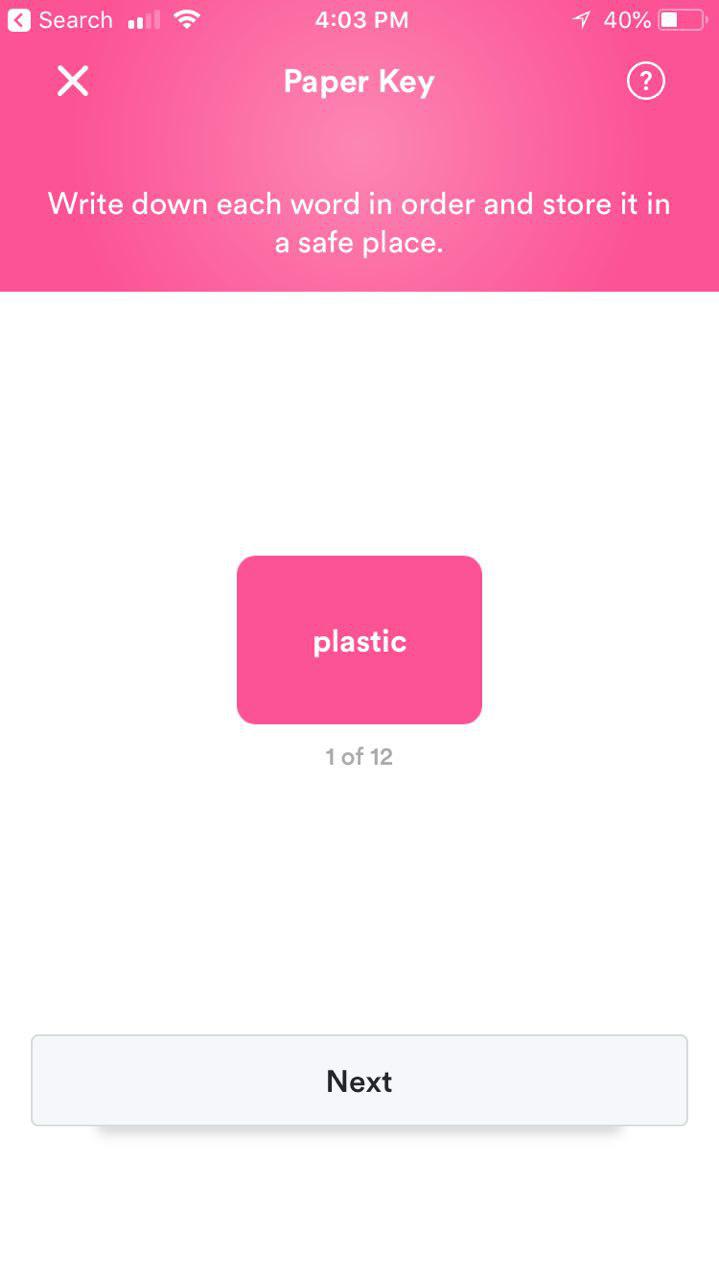 The app will ask you to re-enter two of the words from your seed.

That’s it! You setup LoafWallet and can now receive litecoins. 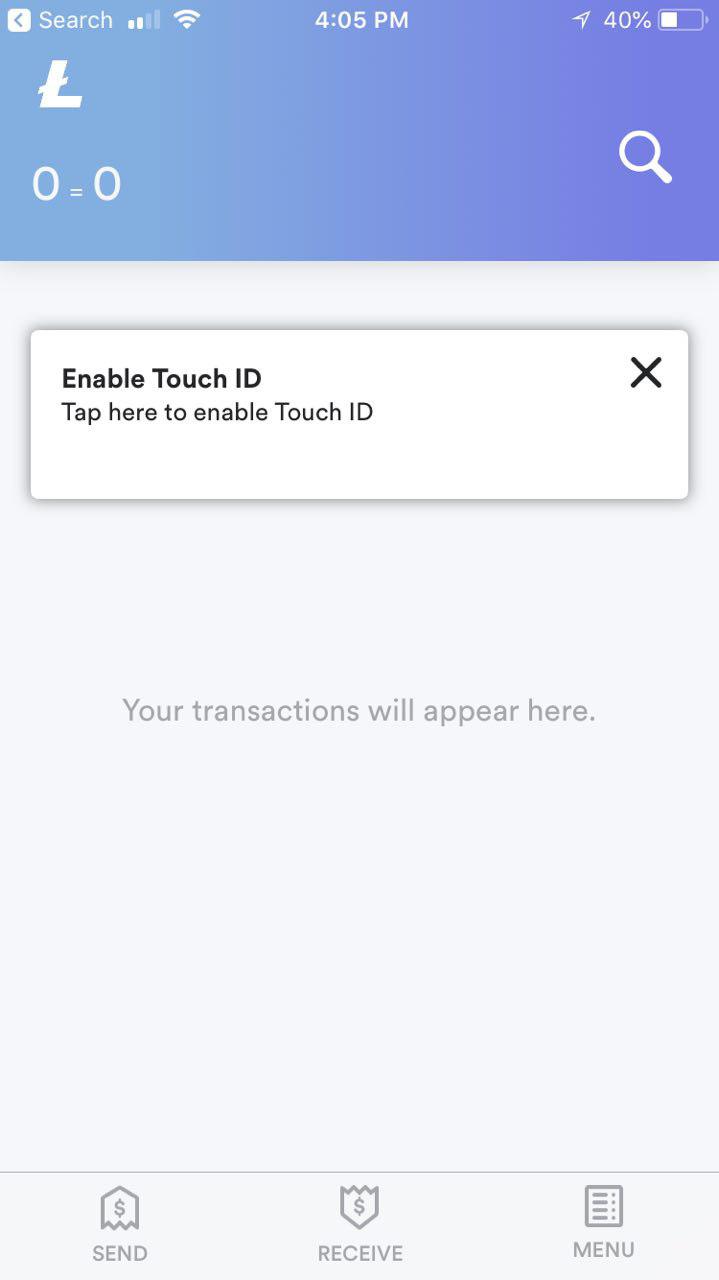 Before we go over the Electrum LTC wallet just remember:

Online wallets like desktop wallets are NOT a good place to secure or store large amounts of litecoin.

For example, here is an update from the Electrum LTC website:

A vulnerability was found in the Electrum wallet software which potentially allows random websites to steal your wallet via JavaScript. Electrum-LTC is also affected. Electrum-LTC 3.0.5.1 was released to fix this vulnerability. We suggest that everybody update.

So, Electrum LTC is fine for small, daily amounts. But do not consider it to be a long term storage solution.

Once opened, the app will ask you to select a server. Feel free to select “Automatically”.

Then, choose a name for your wallet: 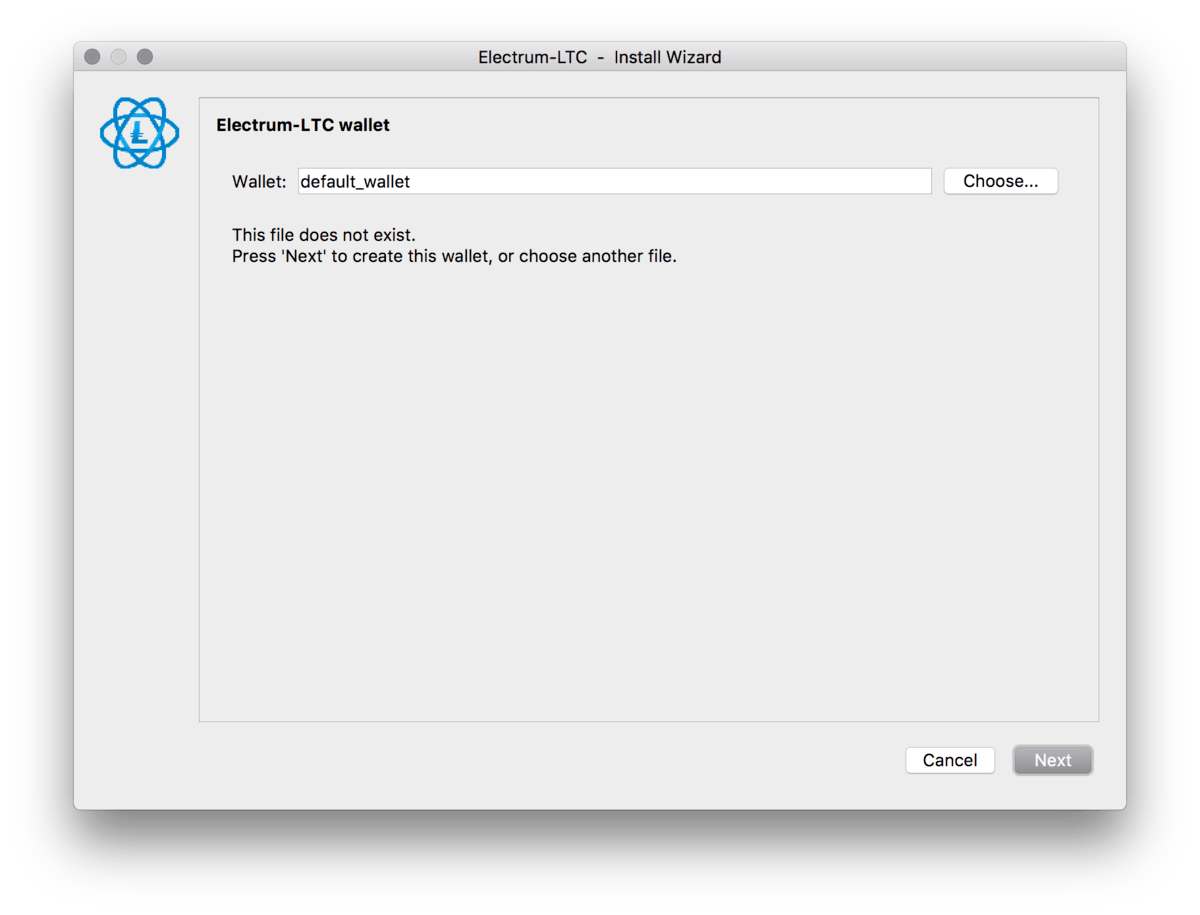 Next, select “Standard Wallet” since that is for basic desktop wallets. 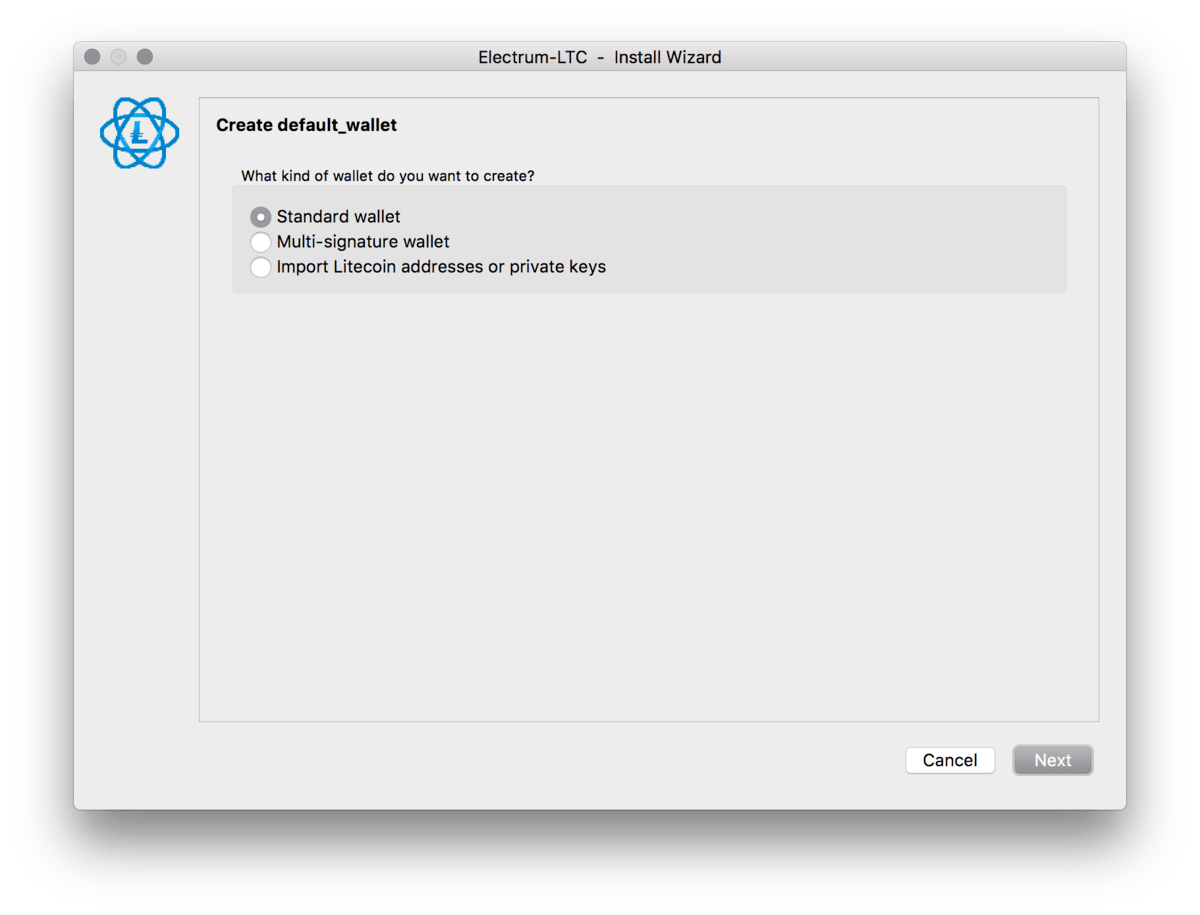 Now select “Create a new seed” since you are making a new wallet. 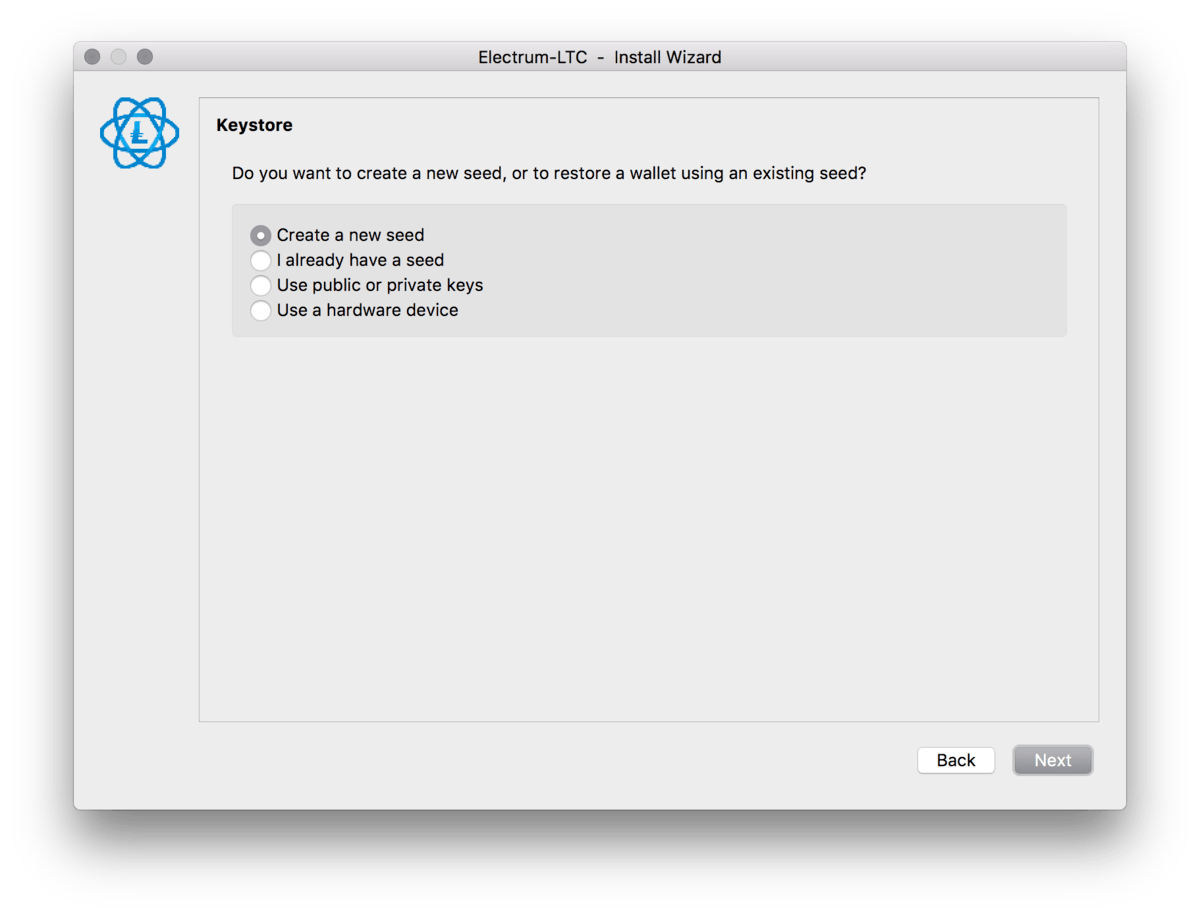 Now, choose which wallet format you want. Standard is the normal address format. Segwit is the new format. Segwit transactions will be cheaper, but some websites may not support sending to Segwit addresses. It does not matter which you choose since you could always just make a new wallet if you run into any issues. 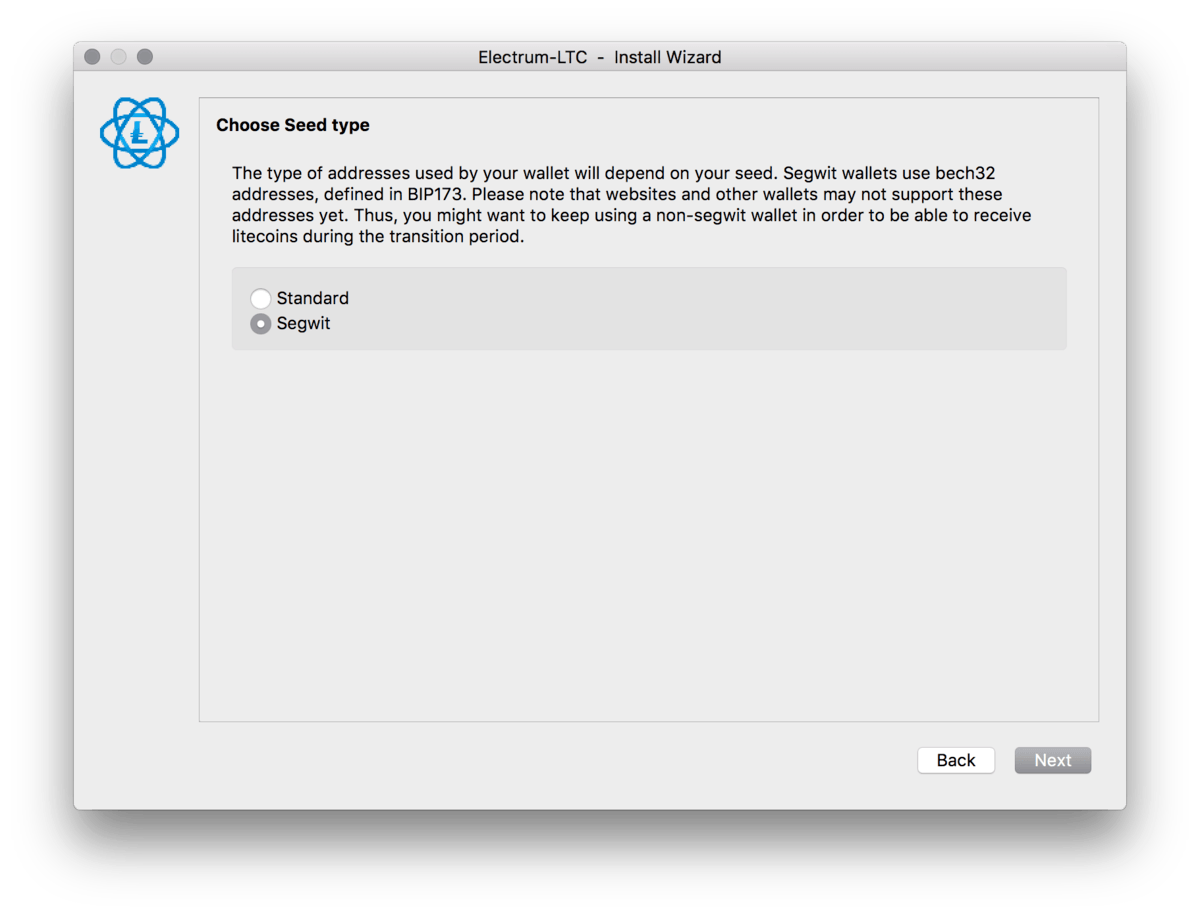 This next step will give you your 12 word seed. This is a backup of your wallet should anything happen to your computer. Write down these 12 words on paper and keep it somewhere safe. Do not input on another computer unless you’re recovering your funds. 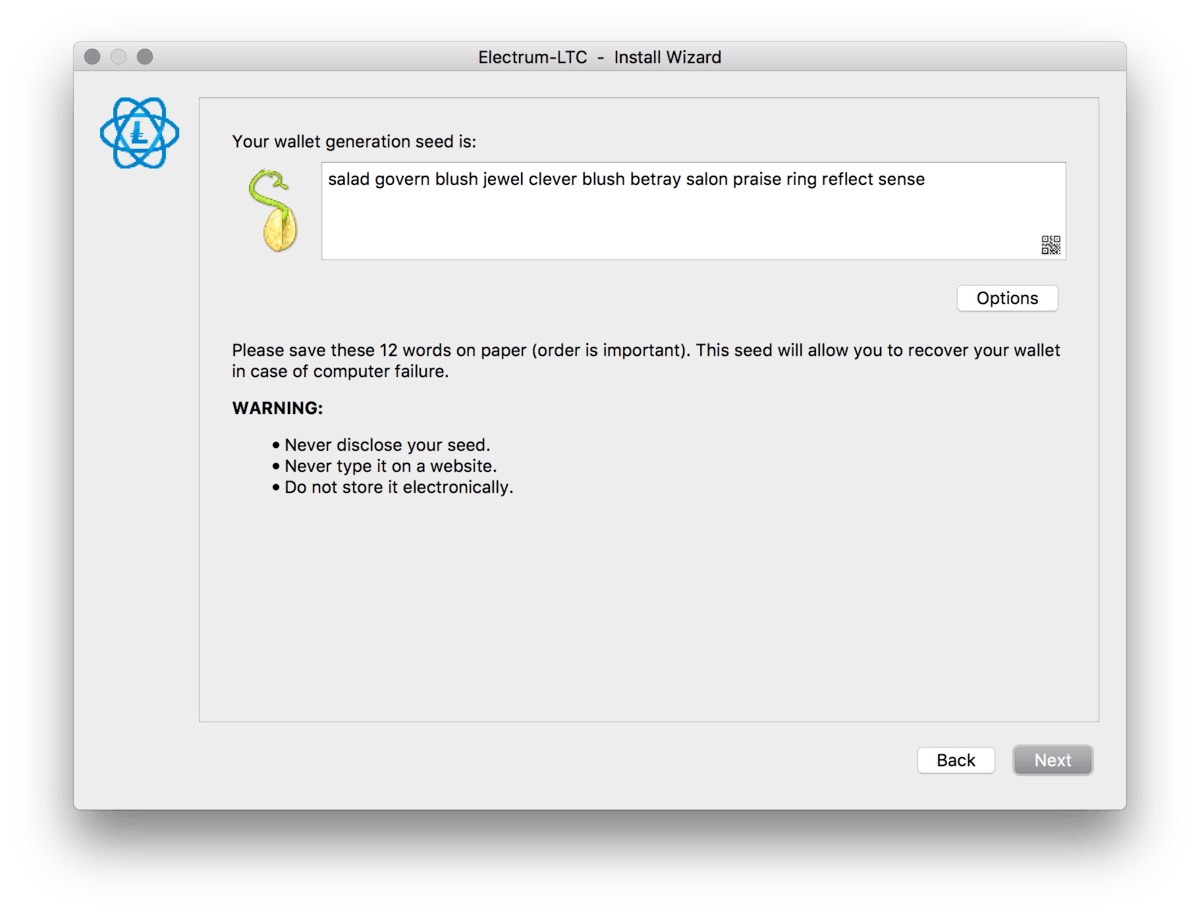 The next step asks you to re-enter your seed to confirm you wrote it down correctly: 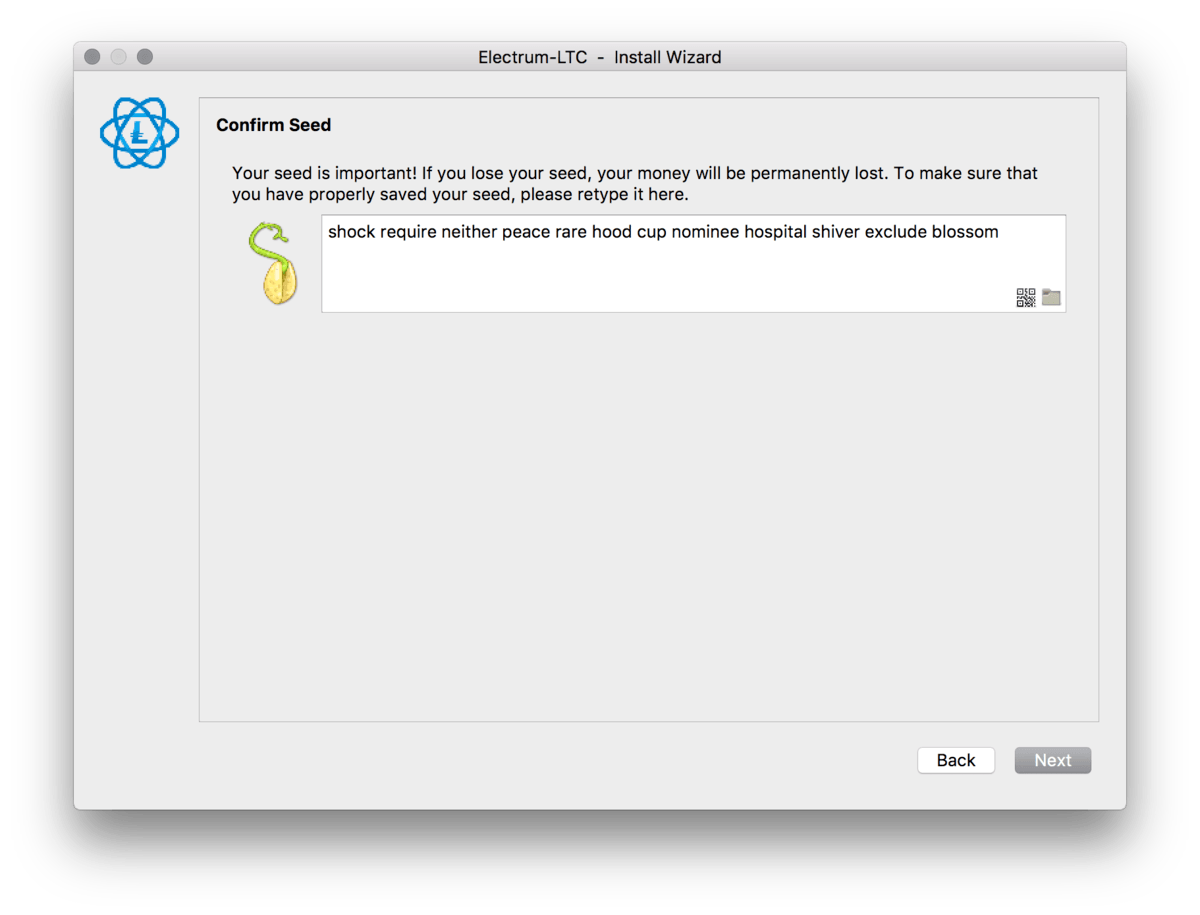 You can also choose to add a password to encrypt the wallet file on your computer. This is recommended, but make sure it’s something you won’t forget! 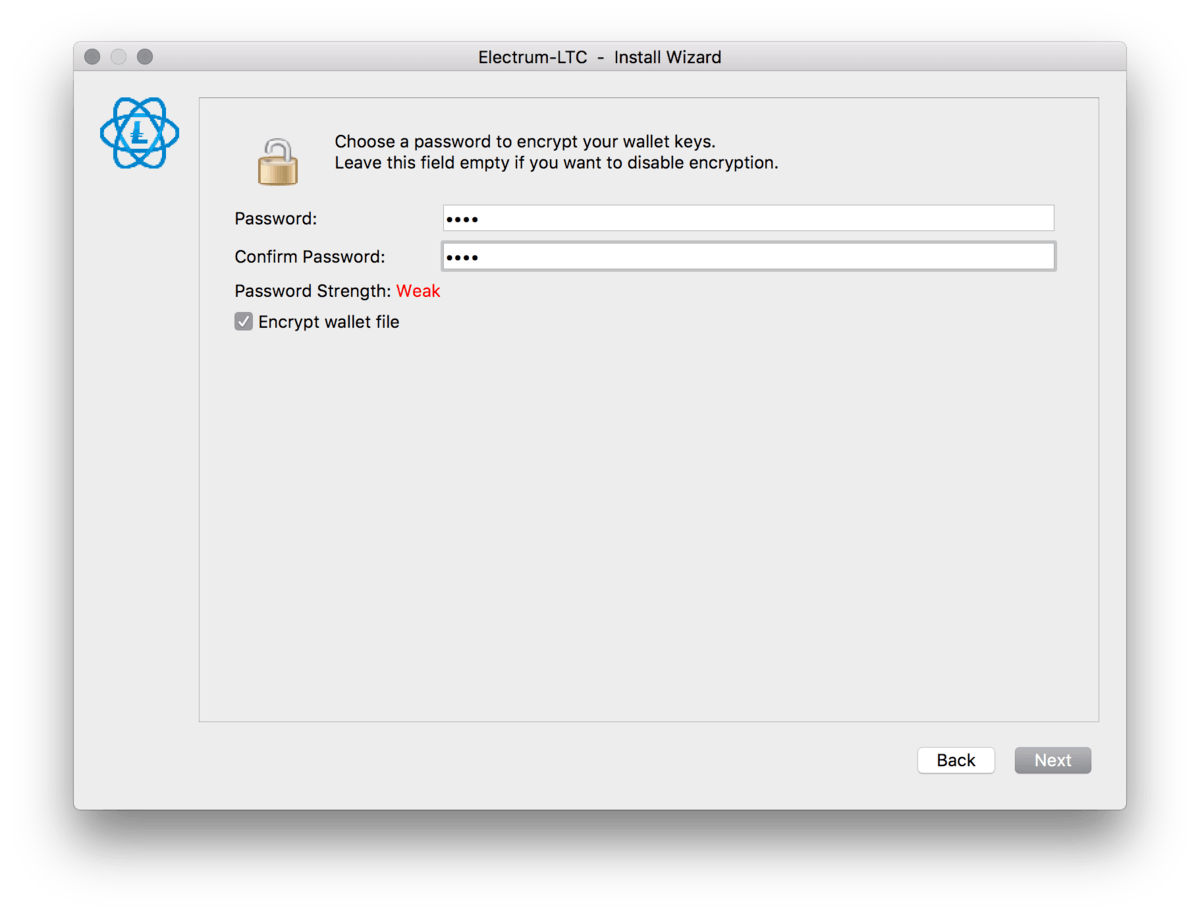 That’s it, your wallet is now setup! Click the receive tab to get a deposit address. 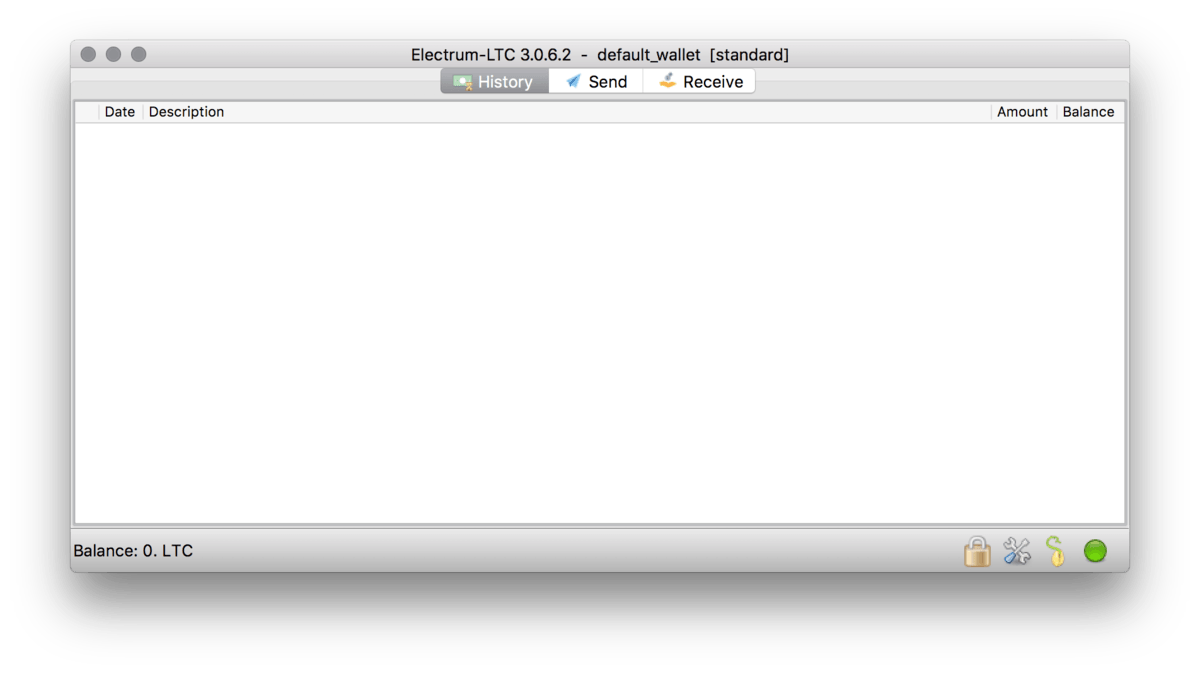 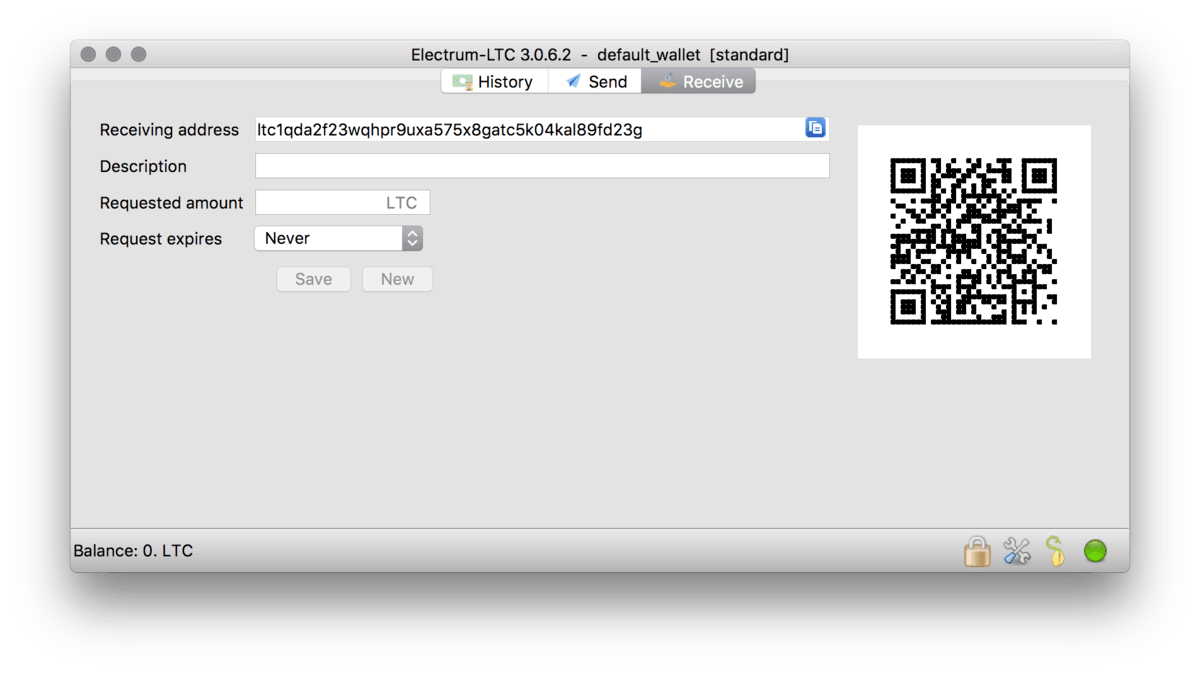 Like we said above, you can also configure a TREZOR or Ledger to work with Electrum LTC. This would give you more advanced features that the TREZOR and Ledger wallets do not offer.

In this section we will answer some common questions about Litecoin wallets and using Litecoin for payments.

What is the best Litecoin wallet in India?

All of the wallets in this list work in every country. So look at the wallets above and those are also the best wallets for India :)

What is a Litecoin address?

A Litecoin address is similar to your email address. It is a public string of letters and numbers that you can give to people. Other people who have access to one of your addresses can send you litecoin.

How do I check the balance of a Litecoin address?

You can use a public blockexplorer to check the balance of any LTC address.

This can be helpful if you sent money to an exchange and want to check the status of your transaction, but your wallet has a bug and isn’t showing you the latest data.

If someone sends you money, this can also be used to check info.

How do I fund my Litecoin wallet?

There is no such thing as a Litecoin account. A Litecoin wallet is the closest thing to an account that exists in crypto.

What’s going on with Litecoin?

The price of Litecoin and all cryptos are down. It has nothing to do with Litecoin specifically.

How do I know which wallet is best for me?

If you are dealing with lots of LTC and invested in it, use a hardware wallet. If not, you can use a desktop or mobile wallet.

Any common mistakes to be careful of?

Definitely. Make many backups of your wallet if you are dealing with large amounts. Too many people have lost Bitcoin and other crypto currencies due to not making backups.

Also, NEVER store your litecoins on an exchange! Thousands of people have lost bitcoins in hacks. While much less litecoin has been lost like this, it is still very possible that this can happen. Especially since the Litecoin price is going up so much and the exchanges will become even bigger targets for hackers.

Will more wallets come out in the future for Litecoin?

Most wallets today are developed for Bitcoin, simply because it has the most users and has been around longer.

We, however, expect many more Litecoin wallets to be released since the crypto industry as a whole is growing and Litecoin is still one of the most popular coins.

What if I send Bitcoin to a Litecoin address?

It is actually possible to send Bitcoin to a Segwit format Litecoin address. If this happens, you simply need to import the litecoin private key into a Bitcoin wallet and you can recover your funds.