Can I Buy Part of a Bitcoin?

Are you wondering if you can buy part of a bitcoin? If so, let me save you some trouble.

The short answer is: Yes, you can.

If you want an answer that is a little more detailed, then this is the right article for you.

What We Call Parts of Bitcoin

You may have heard that 1 bitcoin costs tens of thousands of dollars, and then thought “that’s too expensive for me to afford”.

But it is absolutely possible to own only a fraction of a bitcoin, such as owning 0.02 BTC, or to buy only $100 of bitcoin.

Part of a bitcoin, visualized

Just how divisible is Bitcoin?

Each bitcoin is divisible down to one 100 millionth.

There are different names for the different subunits of bitcoin, listed here:

This was how bitcoin was designed from inception.

It was created to be highly divisible so that even in the case of large value increase, it would still be easily tradable in useful divisions.

That’s a good thing, since bitcoin has appreciated tremendously over the past decade.

It’s worth noting that millibits and bits are not very commonly used any more.

Usually people just refer to bitcoins and satoshis, or “sats”.

While satoshis are the smallest divisible unit for transactions that occur directly in bitcoin blocks, even smaller sub-units are possible on bitcoin’s various second layer technologies.

For example, the lightning network is a payments layer that allows for faster and cheaper transfers of bitcoin.

Buying a fraction of a Bitcoin

Buying only part of a bitcoin is very easy.

You don’t even need to understand all of the subunits explained in the previous section.

If you are buying bitcoins on a cryptocurrency exchange, you can simply deposit your fiat currency, and then purchase that amount of BTC. 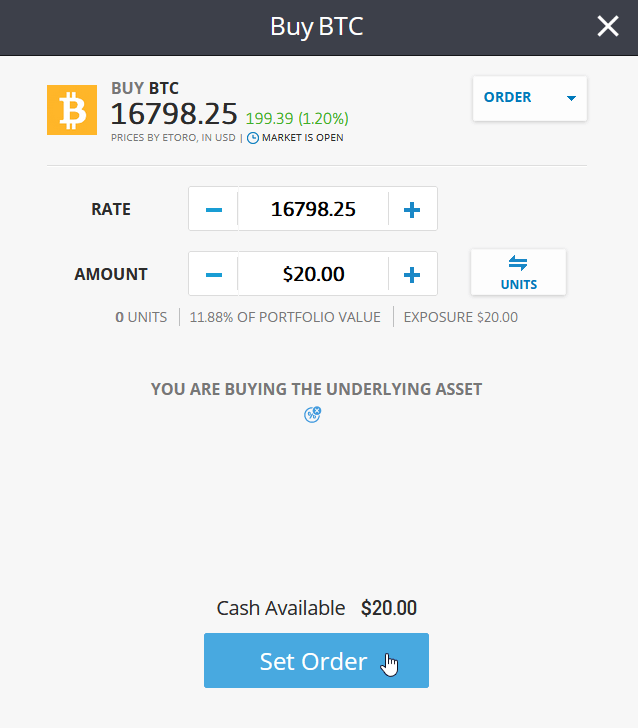 Buying $20 of bitcoin on eToro US

The exchange should then credit you with the equivalent amount in bitcoin.

If and when you withdraw your BTC to your own non-custodial wallet, then the withdrawal transaction should send you that appropriate fraction of a bitcoin, which will automatically be received by your wallet.

You should never keep your coins on an exchange after buying them, even if its just a partial bitcoin.

Always transfer purchased coins to a wallet you control.

This is why, if you ever see amounts from bitcoin transactions, it is quite rare for whole bitcoin amounts to be sent - you rarely see transactions of 1.0 BTC, or 60 BTC.

Fun fact: because the satoshi is the smallest unit of bitcoin usable for on-chain transactions, you will often see amounts listed in BTC going to 8 decimal places - specific right down to the satoshi!

One thing to keep in mind is that because bitcoin’s price relative to fiat currencies is always changing, your fraction of a bitcoin may not reflect the same dollar value over time.

This depends on how your wallet or service displays your holdings.

It is not uncommon for beginners to get confused or alarmed when they see that this dollar amount has changed.