The Bitcoin scaling debate; a tale as old as time.

For years Bitcoin enthusiasts have been arguing about how to effectively scale the cryptocurrency so that it can actually function as a medium of exchange.

By far one of the most popular solutions was to raise the block size and that’s exactly how Bitcoin XT got its start.

Before getting into the exact reasoning behind Bitcoin XT a brief overview of blockchain mechanics is in order.

On the Bitcoin blockchain each block is only around 2 MB, which limits the number of transactions that can be included.

The result is that during periods of high demand, sending a transaction on the Bitcoin network can be slow and expensive.

In 2017 toward the peak of the bull market fees reached as high as $50 or more per transaction and some transactions didn’t clear for a day or more.

What is Bitcoin XT?

The Bitcoin XT project hoped to solve the problem of increasing Bitcoin fees by increasing the block size. 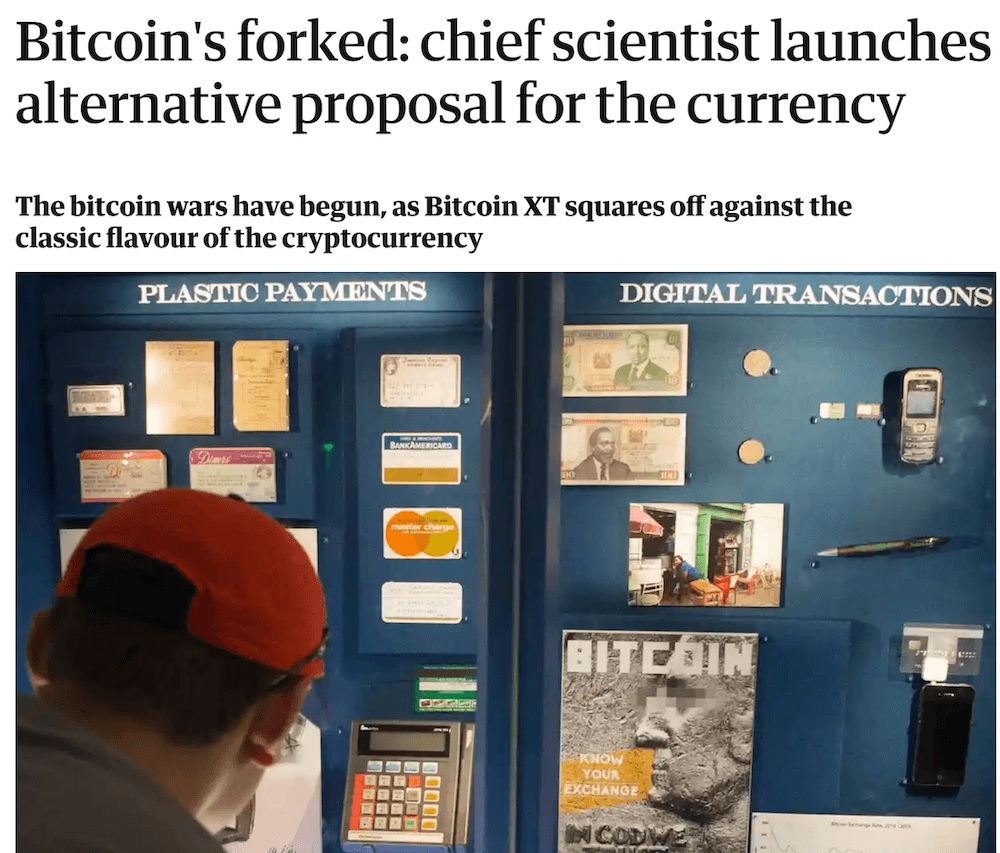 The result of a collaboration between Mike Hearn and Gavin Andersen, the Bitcoin XT project forked off of the Bitcoin Core (BTC) protocol and the hope was that with its increased ability to handle more transactions the Bitcoin community would adopt XT and stop using Bitcoin Core.

In this way the XT project served as a sort of early version of the Bitcoin Cash project, which hoped to do the same thing:

Unfortunately for Mike Hearn, the Bitcoin XT project did not quite work out the way that he’d hoped.

The Failure of Bitcoin XT

Like all Bitcoin hard forks, Bitcoin XT didn’t make it and was not adopted.

The fork happened midway through 2015 and in the beginning it appeared like there might be widespread support.

Within a few days of the fork there were about 1,000 nodes running XT as you can see in the picture below. However, it is believed now that most of these nodes were fake.

Popular support didn’t last long though and by November of that year, only about 400 nodes were still running on the XT protocol.

As of publication there are around 15,000 nodes on the Bitcoin (BTC) network and 3 nodes on the XT network. The only real question is, who is even bothering to run 3 nodes at all?

Bitcoin really does have a scaling problem, it’s not propaganda, and raising the block size limit would be a simple way to at least alleviate part of the problem.

Instead of raising that block size, however, Bitcoin Core developers have elected to spend tens of thousands of hours (and likely millions of dollars) developing the Lightning Network as a solution to scale Bitcoin.

Why would they do that if raising the block size would appear so much more simple?

The primary argument against larger blocks is that they lead to centralization.

The smaller the blocks, the more people can run a node. Increasing the block size also increases the hardware demands for a node.

Another argument is that changes to the Bitcoin protocol should be kept to an absolute minimum. Bitcoin developers are well aware of the billions of dollars worth of value that BTC stores and they’re loathe to make any changes, no matter how small, that might disrupt the chain..

Who is Mike Hearn?

It can be interesting to learn about Mike Hearn as he has been associated with Bitcoin since the beginning.

Given his early involvement he was actually able to communicate directly with Satoshi on a variety of subjects. Copies of email exchanges between Satoshi and Mike Hearn are now posted on Mike’s website.

Gavin Andresen also communicated with Satoshi and is often recognized as the last person to have spoken with Satoshi.

Frustrated with the lack of support for XT, Hearn labeled Bitcoin a failure, quit working on the project, and sold all of his bitcoins in January 2016.

It’s not that Bitcoin forks like XT don’t actually make some progress toward solving the scaling problem, it’s just that the Bitcoin community has decided that it cares about decentralization more than anything else.

If Hearn and other devs would have been able to change the block size parameter, who knows what else they may have tried to change in the future?